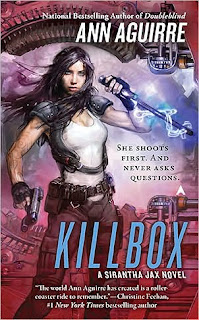 Cover stuff - The main character, Sirantha (or Jax) is supposed to be covered with fine scars; I think that's what's being depicted on her arms here. I've never really been very crazy about the covers of this series. In fact - the cover is not what first drew me to Grimspace. Jax's hair is described as being coarse and unruly. The background does ring true though. It's looks dire. Jax is holding weapons, and looks ready to fight. I do like the colors on the cover, but on the whole, with the complete series, there's been other covers I like better than this style. But it's the inside of the book that counts more anyway - although, like I stated before I almost didn't buy the very first book because I thought the cover was a little...blah. I am so glad that I did try out this series though. Way back in 2008, Grimspace was a book that I ended up buying because I was at the bookstore and couldn't find ANYTHING else that caught my interest. Turned out to be one of the best book buys I've ever made.

Sometimes you read a book, and after you finish it, you want to re-read the whole series again, just to experience the world, the characters and the stories all over again.

Sometimes there is a series that just gets more intense as it continues, and each book is just as wonderful to read as the last in the series...I have, luckily a few authors that I feel this way about, and there's a couple that I just gush about, (no matter that I'm now 50 and WAY to old to be squeeing and gushing like a fangirl over authors and books...but there you go-can't help it sometimes...)

The Sirantha Jax series is one of those series for me, that just has gotten better and better with each book. I also wanted to jump right back into Grimspace (the first) as soon as I had finished Killbox. In fact, even though I am currently read a wonderful book by Brenna Yovanoff (The Replacement), I have been reading a chapter here and there from Grimspace, and that's just since Tuesday morning. I'm rationalizing this by using it as one of the 2008 books for the 2010 Countdown Challenge that I am epically failing at this year. (huge, epic, grandiose FAIL)

Killbox is the fourth book in the Sirantha Jax series. Sirantha and March continue their fight against the Morgut (you won't know what I'm talking about here, unless you've been reading this series) ....Let me back up.

The Sirantha Jax novels are about the far, far future. They are science fiction with a bit of romance built into the novels. Normally, this would totally put me off a book, but this works here. Sirantha Jax is a woman who was born with a J-Gene, making it easier for her to jump into grimspace, a method of space travel that makes it possible to travel lightyears in very little time. Remember - Science Fiction.

There are many, many species, galaxies and planets. The species mainly dealt with are the Ith iss Orr, Humanoids, and the Morgut. Humanoids, are ..well, humans. The other two are insectoid, though able to fly ships, have cultures and planets....it's all very involved and complicated, although when you read the books, it all falls into place.

Sirantha has weathered quite a few crisis, and has found some very close friends through out the books. Her main companions she's been with since the first book; Vel, Dina, Doc, March... She's become closer to all her friends, and yet in this fourth book she feels as if she's losing friends. Their lives are becoming more and more complicates. In Killbox, things have progressed to March, Sirantha and friends building a fleet of space fighters. The Morgut, a very violent Hungry species are invading the planets and solar systems that are currently being colonized and occupied by humans. Humans are an intoxicating meal to the Morgut. The new regime is trying to find solutions to all the raiding and attacks on outlying planets and colonies. Sirantha and her friends are now a part of the solution, and things are getting more and more complicated and grave.

The narrative and story line in Killbox continues to be a pleasure to read. Ann Aguirre does a wonderful job with the progression and growth of Sirantha's personality. Sirantha has gone through a lot, grown a lot and changed quite a bit. Her companions have also gone through their own changes. The series is written in first person present tense - something that you forget after a short while.

There are wonderful conversations (never lame dialogue!), a bit of relationship angst (not too much though - there's other stuff going on, and it never gets too heavy), some spectacular fighting scenes (both hand to hand and ship to ship), and a few twists and unexpected events.

I only wish that the next book was already out, but like all good things, you have to wait.

If you've been enjoying this series all along, you won't be disappointed in Killbox. If you haven't yet started this series, and enjoy sci-fi, suspense and a bit of romance you'll love this series. In fact, it's listed as Romantic Science Fiction on the website, but don't think it's going to be all "heaving bosoms, and throbbing manhoods". It's definitely NOT one of those books where every few pages the characters are thinking how Hot someone is, and how they want to be....you know where they want to be...Nope, this is a series where a couple of flawed and damaged people happen to get together, fall in love and go through some shit. It should be read from the beginning, though...