Monday - the Hottest Monday In History! or at least lately 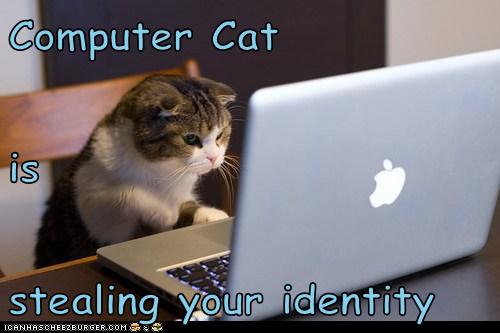 Ooh boy, it's been a hot weekend...or it's been a hot Sunday afternoon.  Monday is supposed to be cooking in our part of the nation.  And it's going to be a long mostly outdoor workday.  Not looking forward to that!
On top of that, it feels discouraging right now to have my job. Mini rant begins: I just got my first full month paycheck of the year.  I cleared about $900.  They took out $296 for insurance - just health.  I was told my insurance would cost me $136.  Something is very wrong.  And that is just for me, no one else is covered on it.  I might have to cancel my insurance.  I can't pay rent on 900 a month.
All Month Long.  I might as well be working at McDonalds.
That's my rant for the day.
I'm not into really ranting much, because I'm that discouraged...
The one good thing is that I do have my lunch duty check coming - which will probably be about $100 - gas and a book or two.
Whatever - maybe things will get better - we can only hope...(and hope...and hope.....and...)  Sometimes things just seem so hard.
At least I have the internet....haha - so far.

It's that time again - Time for It's Monday, What Are You Reading?

Hosted by Sheila of Book Journey, this is the place and time to share what we've been reading, in my case what I gave up on (even if only temporarily gave up) and what we might read in the future....
To be perfectly honest, I didn't read much this weekend, and the weekends are when I get the majority of my reading done.  Just wasn't into reading - or I was, but I was distracted quite a bit. 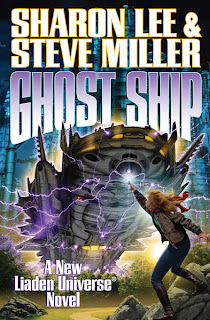 Before I knew I was going to be so poor, I went on a mini-splurge and bought five books.  One of them is my current read, Ghost Ship by Sharon Lee and Steven Miller.  The book is interesting, in fact it started out much more interesting for me than the first book I read by them, which was Fledgling.                                                               Blurb from Baen Books:   "Theo Waitley is an ace starship pilot - and pure maverick.  Her mom is a renowned Terran Scholar and her birth father is an interstellar aristocrat in hiding.  Whatever, thinks Theo. She still feels like a socially-challenged misfit. But after being selected to train with the best-of-the-best at the pilot academy, she figures she can leave behind those gawky, misfit days of teenage angst that made life so complicated before! But for Theo, life is about to get even MORE complicated-and deadlier still.  For even though she's survived the Academy and become one of the best pilots in the galaxy, the past is about to blast her with gale-force winds.  Theo can run, but she can't hide.  Her destiny as master pilot and leader of a powerful Liaden clan calls, and there are LOTS of enemies who will try to make sure she's quite dead before she has the chance to make an answer."
So far, I'm enjoying Ghost Ship - it's a good story, good writing. I have to say the blurb does nothing for me, if I hadn't already decided to read this novel, it might have discouraged me from it.  Go figure.  I think it's the "can run, but she can't hide" quote.  I hate that phrase, it's overused.

Now - the book I temporarily gave up on....
I was reading Manifold Space by Stephen Baxter.  I really tried to stick with it, it should have been a good read.  When this guy tries, he can write a good story.  Unfortunately his space science lectures and lessons keep getting in the way.  If you are a hard core science fan, you might love this style of writing.

blurb from Goodreads: "The year is 2020.  Fueled by an insatiable curiosity, Reid Malenfant ventures to the far edge of the solar system, where he discovers a strange artifact left behind by an alien civilization; A gateway that functions as a kind of quantum transporter, allowing virtually instantaneous travel over the vast distances of interstellar space. What lies over the other side of the gateway? Malenfant decides to find out. Yet he will soon be faced with an impossible choice that will push him beyond terror, beyond sanity, beyond humanity itself.  Meanwhile on Earth the Japanese scientist Nemoto fears her worst nightmares are coming true.  Startling discoveries reveal that the Moon, Venus, even Mars once thrived with life that was snuffed out not just once but many times, in cycles of birth and destruction.  And the next chilling cycle is set to begin again"
It's not that chilling, folks.  The sheer wordiness takes care of any attempt at chilling or shivering terror.  In fact, Malenfant's "beyond terror, beyond sanity..." takes so long to come about that everything is kind of an anticlimax, just from the wordage that precedes and surrounds every single...event. 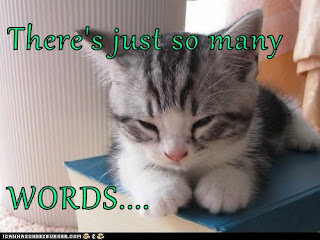 Maybe one day I'll go back to Manifold Space - maybe - it was just way too frustrating looking for the story within the 'lectures'.

That's it - I found some interesting books at the store - of course now I feel guilty for buying them, but they're bought and already on my shelf, so...mine.  (wink!)
The next photo went viral - couldn't resist the chance to caption... 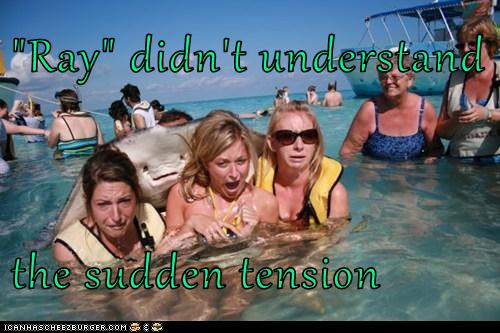 Oh - what the hell - I'm going to list the books here, just because I'm excited to have bought them! ;)

Matthew Hughes' To Hell and Back (The Damned Busters, Fantasy) - an accidental demon summoner who refused to sell his soul, strange heroes, mass confusion, a frustrated lord of hell....This looks like it might be satiric, reminds me of work by Pratchett and Gaiman, a mix or hybrid of them.

David Drake's & John Lambshead's Into The Hinterlands (SciFi) - colony planets, nobles (ahem) rich families, desperate families, altered humans, military, space explorations....(hope this is more interesting than my last deep space try)  I skimmed some pages to make sure I wasn't going to fall into an abyss of lecture quality reading....doesn't seem too textbookesque....
Posted by Mardel at 2:32 AM