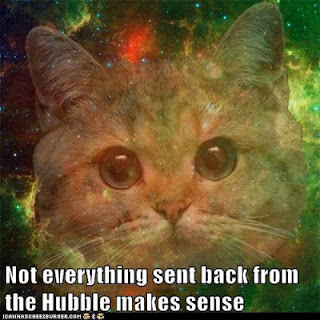 I'm going to be completely honest here....I read this novel over a year ago.  Yes, I did.  A year ago.  And then I read some more books, and read other posts, and wrote some reviews, and read some more novels, and went to work, played with grandchildren, slept, read some more, goofed around on the ol' internet....and did not write a review for quite a few of the novels I've read in the last couple of years.  So, I'm trying to rectify that now.  Consequently, I'm going a bit from memory and have re-read a book blurb or two  (click here for Goodreads blurb) to refresh my mind on character names - but the gist remains the same.
I read it.  Enjoyed it.
Would love more Jenny Casey from Ms Bear, but this was a trilogy;
here is my review on the finale of the Jenny Casey SciFi/Cyberpunk book - Worldwired. 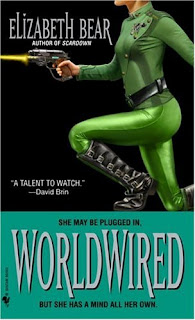 cover - as with the other two covers in this trilogy, I love the simplicity with the hint of danger.  And those boots.  Would love a pair of boots like that!  Anyway, boot envy aside, the drama of the black background with the blue foreground is just perfect for this cover.

As with the first two novels of this trilogy I completely enjoyed reading Worldwired, this last of the trilogy about Jenny Casey, a future Earth, aliens and artificial intelligence.  In the first and second novels, Jenny went from a 'retired' special ops military with old cyberware in the form of a 'cyberarm' and other parts which are eroding (or deconstructing, failing, whatever the correct term would be for failing prosthetics), intense pain, post traumatic stress (the cause of her having to have a cyberarm complete with metal hands that can CRUSH things), to a reluctant reassignment to the military complete with prosthetic and wetware upgrades.  Only these upgrades come with a port to her brain - the wetware, which also controls the spine.  This is very cool stuff to read about when written about the way that Bear writes it.  It wasn't done in a dry manner that made me feel like I was taking an advanced neurology class with no prerequisited under my belt.   Things have happened, horrible things to the world in the last novel and there are some character losses (one of my favorite characters, in fact) - but the story continues.

**Spoilers Abound!
(There Be Spoilers Ahead)**


{p.s. It HAS been out for 7 years now - wink, grin}
Worldwired takes place after the meteor was thrown on Toronto by one of the other superpowers - the PanChinese government, and it has caused major destruction of the ecosystems, the deaths of millions of people, starvation, and all the other disasters that come with an event like this.  The starship Montreal and another starship is in orbit around the world, and there is the possibility of race between the governments to find another planet to colonize.  Jenny Casey and the younger pilots are in the Montreal, along with the AI Richard and Richard has been busy trying to contact the other starship, facilitate cleaning up of the ecology with super advanced technology, and splitting himself into at least one more AI (if I'm remembering this right).  And there's a court case on top of everything else.  Chaos reigns on the world, and the starships are under a lot of pressure.

Then there are the visitors!  from another system.  If I remember right, there are two types of alien starships that appear, and the Montreal crew needs to decide on visiting the starships, hell, they have to figure out a way to even communicate with the new arrivals.

There is a lot packed into this last novel, just as in the other novels.  This was done superbly with dialogue, narration, and some action scenes.  I enjoy Bear's style of writing, and in the first two novels had no sense of being overwhelmed with information that I didn't understand.  With Worldwired, there was a bit more - not quite information dumps, but there was some conversations going on about language and theory that were a little hard to completely get for me (I'm a little lazy brained, but I don't think I'm dense).  This wasn't a big enough issue to bother me though, Ms Bear definitely does not overwhelm the reader with pages of incomprehensible information to non-scientists.

Some characters from the previous two novels are shown to have even more hidden depths than hinted at.  Other characters have aged, and some have matured.  Valen's, his grandchild, Jenny herself has changed in more than mechanical ways.  Ms Bear is a wonderful storyteller with a talent for characters and dialogue, along with the plots and intricate subplots.  And she must have a hell of a scientific brain.  I'm impressed.

BUT....with this novel, and the other two, there were lots of French sentences peppered through out the story.  I don't speak French.  At first I considered using Google translate, but it definitely would have taken some time to translate...and there was enough French that I wish Ms Bear would have taken a little pity on us non multilingual readers and at least given a few HINTS on what was being said.  Even so - enjoyed the hell out of this last Jenny Casey book.  This trilogy is one of those sets that I know I'll end up re-reading some summer vacation.