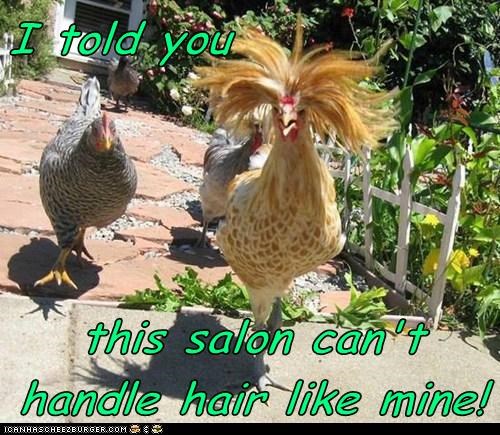 I've had a whole entire week of being lazy...the extent of my activity has been reading, sleeping, watching t.v., and thinking about dying my hair -  I've been getting very tired of my gray and white hair.  I've even gone so far as to send off for a copperish color of dye. I used to be brunette - the type of brunette with auburnish highlights from the sun. Kind of waffling on this, because I know I'll have to deal with the white roots coming in, and there's nothing worse (with hair, that is) than having a bunch of white hair in skunk like roots coming in - it can make you look pathetic pretty quick.  within two to three weeks of coloring your hair.  One option, is deliberately leaving a few chunks of white, hoping for a streak effect.....
I did re-arrange drawers in my kitchen - or rather, I FIXED the drawers, since a house full of men means that things get put where-ever they end up - no rhyme or reason, just stuff things where-ever the whimsy strikes.  grrrrrrr.


I usually link to Sheila's It's Monday, What Are You Reading? post, but I think she's still out of town, on her weekend getaway - I don't see a Monday post to link to yet.  So I'm linking to her home page,  we'll just have to see how things go.
Anyway, I haven't been doing very good on these posts.  I've missed a few, and then last week, when I finally posted, I didn't visit very many other blogs - being the lazy person that I was this past week.  LOL, who am I kidding?  No One!  I'm always lazy - but I've been lazier than normal (it all stems from a childhood of having to work very hard on the weekends,CLEANING house, doing laundry - and babysitting my little bros after school! like many people my age, we children had to work - do chores,we didn't just play.  lol - don't get upset, young ones.  I know some kids do have chores nowadays, but a lot of kids don't)

So - It's Monday, What Are You Reading? - the usual.  We visit each other, see what we've all been reading, or finished reading (if we've managed to finish any books).

What I finished reading: 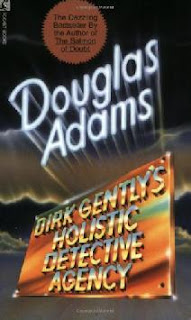 by Douglas Adams
One of two books that feature Dirk Gently.  I think this is the first one...(The second one is better...)
This one jumps back and forth between another dimension and a monk who happens to ride a horse and college professor and one of his students - this goes on for almost half a book before something actually HAPPENS and we finally meet Dirk Gently, who is not a very likeable person.  He's a bit of a con.  There are some snooze-worthy bits, but there are also some very chuckle-worthy bits, so I stuck with it.  :)

and -
Once a Hero 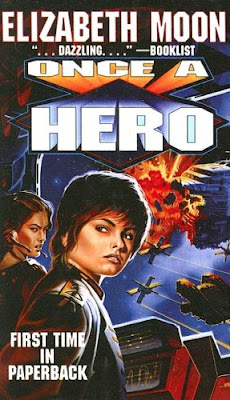 by Elizabeth Moon
The story of Esmey, not one of the Serranos, (there are quite a few books featuring the Serranos, a space/military family) but a woman who finds herself on the same ship as a Serrano more than once; one time there is a mutiny, and the other time with a different Serrano there is an attack on the  Deep Space Ship Repair vessel that they're on.  It was interesting, even though the character could be considered a Mary Sue - she's just so.... unassuming and barely has any experience and yet manages to play a huge part in...well, you'll have to read the review.

The Dead Of Winter

by Lee Collins
This is a book I've started previously - and as usual have flitted around to many other books in the meantime...but I do keep coming back to this one - even though I'm in a SciFi mood.
The Wild West...Mining towns, Old Miners....and a woman who happens to hunt monsters.  Vampires, and other critters from hell.
I already have the sequel here to read; it was one of those books that i accidently bought the second in the series.  But so far, this is interesting enough for me to think I'll want to read the sequel so 'sall good.

My sleeping habits have completely turned around.  My nights are wide awake - my days are spent either sleeping or extremely sleepy.  I wouldn't mind this, except for the vaguely guilty feeling I'm having.  Like I should be at work - or being productive.
We did go to the beach one day with the grandchildren.  That was fun, even though I thought we should have stayed a bit longer.  We were only there for about three hours.  But the kids played in the sand, chased the waves - staying a good length away from the water (granma is very paranoide about riptides and losing kids to the ocean)- played with seagulls, found some shells and bought some taffy.  yummy. 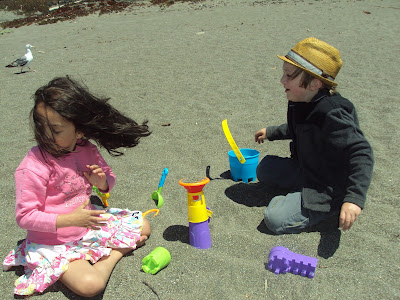 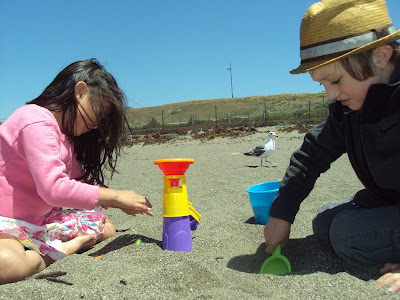 One moment that stays in my mind - hearing the two of them in the back seat harmonizing to "I Knew You Were Trouble" by Taylor Swift.  They sounded so wonderful singing together, and like many children were completely unaware of being heard, and therefore sang completely in tune.  Five and six years old - I wish I had had something with me to record them at that moment... ah well, something for the memories.
I hope everyone is having a good summer so far
Happy Reading All!