It's Monday, and I'm Reading This and That, That and This... 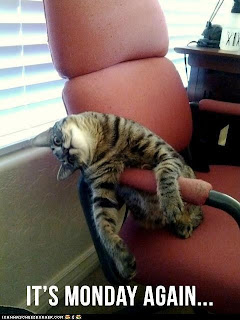 It's Monday - and not only is it Monday, but it's coming towards the end of July.  I find myself beginning to feel a bit panicky - normally I would be looking forward to going back to running the afterschool program, as well as returning to the library job I have; but the school district, in all their infinite wisdom decided to change the way they run things, which meant that I and about 7 other employees lost their jobs.  Along with that, the other participants in the afterschool program lost their contract, which means that all the people that were working with us lost their jobs....Bottom line is I'm going back to less than half the time I did have, and feeling a little panicky about how I'm going to make ends meet.  (This is turning into a personal mini-rant blog)
I finally broke down and applied for unemployment insurance.  I'm sure I qualify, since there's a line there about people who have lost part of their income - in so many words.  I should have done this earlier, but things weren't so tough earlier.  Hindsight is always better than foresight!  But I'm not sure I filled out the application right - there's no way on those applications to explain that I worked for the same place for over 15 years, and yet was paid from three different budgets, and now my hours are less than half.....Oh well.  I filled out the application and submitted it.  Now I have to just let it go and see what happens.  Things have been very tough around here.  Between my son who lives with us losing his job, my husband being out of work on workman's comp and them lowering their payments, and me losing most of my income, things have been mighty tight.  I've never seen our fridge empty for so long a period before.  We went from spending $200 a week on groceries to less than $50 a week.  No fruit, little veggies - if it weren't for the tomatos we're growing, we'd have NO veggies.  Eating healthy costs too much money.
Keep your fingers crossed for us, please.  I know there are a lot of people having a hard time - we've been going backwords and now we're older - it's harder to just go out and find work now at our ages and with our respective conditions.  I wanted to be planning my retirement soon, not worrying about paying bills and eating!
Thank god for the books I already have here!  I'm going to have to start entering book contests again to get new books if things don't turn around - haha!  I actually have many books here that I haven't yet read, so this will be a good time to start chipping away at mountainous TBR pile that I've been adding to for the past few years...  seriously - I have books that have been waiting for five years!   :)
Sorry bout the rant - Guess I felt the need to publicize my bad financials, at least I actually cut a lot of this out.  There was more, much more.  LOL!  So on to the books I've read..... 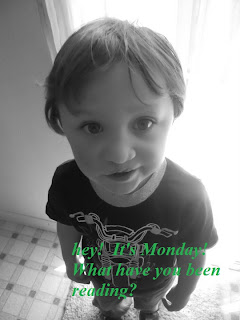 It's Monday, What Are You Reading? is a weekly book blog hosted by Sheila at BookJourney.  We "get together" and "talk" about what we've been reading and what we're going to read - or what we'd like to read.  It's fun.  Lots of people are taking part - over 100 people go to BookJourney to take part.

I'm picturing an anthology here, but I've only read one story from it - Full Scale Demolition by Suzanne McLeod who is at the top of my alltime favorite writers - I will buy any story with her name on it - and read anything I can get my hands on with her name on it.  This is a re-read for me, but sometimes the second time around for a short story is even better.  I find that I tend to rush through a short story - get all over enthusiastic or something.  So the second time around, I usually appreciate the story more.  And this one was a fun short story.  Gave an interesting, dangerous event from Genny Taylor's job, and had everything you need in a short story - danger, just a tease of lust/romance, good plot and fun characters.  Genny Taylor is the main character from the Spellcrackers.com series (The Sweet Scent of Blood, The Bitter Seed of Magic).   Fun to give myself a little tease when I know I'll be able to read the next in the series very soon.  The Shifting Price of Prey (#4) will be coming out in August of this year, in the UK - but come hell or highwater, I'm going to have a copy - sooner or later.  :)  it's a firm goal. *g*

The only other book I read this past week was The Peach Keeper by Sarah Addison Allen.  This is the fourth and most recent novel by Allen, and had that touch of magical realism that I look forward to in her writing.  Review will be posted soon (I actually wrote it already! and it's scheduled for posting via the scheduling thing-a-ma-jiggy.  Sometimes I tend to wait a while before writing reviews.  I think there are books I've read from the beginning of the year that I mean to write.  I post quickly for requested reviews, and some of my favorite authors - but I'm pretty good at procrastinating.  It's an art. *g*) - look for it next week.  Good book, satisfying read. :)

I found myself jumping back and forth between a few of my books last week - some of them just didn't really GRAB my attention for the moment. Not at all the fault of the writing styles, or the novels - both of the books that I started to read are well written books.  Good narration, plots are exciting - my mind just wasn't into them at the moment.  Later, I'm sure I'll get to them later and enjoy them quite a bit.  Then I started thinking about that TBR pile I mentioned earlier - I have books that I just HAD to buy right when they came out, books that when I bought them, were put on a shelf (if they were lucky- those are the ones I can find now), or laid down somewhere (those are the unlucky ones, the ones I'm not sure where they are at the moment - did I give them away? did I inadvertantly throw them out? unlikely.  are they HIDING? more likely - damn books-never know what they're up to) meaning to get to them...and up to four or five years later....

When I'm being organized (haha!it's rare) I put these books in one of four places.  So Sunday I toddled over to the living room TBR shelf and went through a couple of books.  I found one that's been waiting since May of 2010.  2010! I just saw a review on one of the sequels, for crissakes.  So I picked up Hunted By The Others by Jess Haines and started reading it.  In the span of three hours I had made it to halfway through the book, it's interesting - a couple pages of serious informational overload- but the information is actually written in an interesting manner, maybe I shouldn't refer to it as overload.  So I'll call it worldbuilding.  heehee.  This is the book I'll be focusing on this week, probably will end up finishing it in the next day or two - barring distractions.  Then it's on to another from the infamous TBR pile....except;
Expecting in the mail
*from birthday money - (to alleviate some guilt)*

I had just a few dollars to spend on myself for birthday books.  I had noticed that Stacia Kane's latest Downside novel was supposed to out - since the end of June.  But every time I went to Barne's & Noble, I could not find it, neither could I find Tin Swift - Devon Monk's latest steampunk novel.  It's supposed to be out now, also.  What is UP Barnes&Noble??  I didn't feel like ordering it from them (still bitter bout them being the only major bookstore in my town since Borders fell)  so I didn't order any of them from them.  Instead, I found out that I have one month of free prime membership trial from Amazon thanks to having a KindleFire.  The only thing I could get from that was free two day shipping and it'll expire on August 9.  So I ordered Chasing Magic - a print copy because I decided that I'm going to collect print copies of books I love to pieces and get books that I'm not sure about, or would pass on through the Kindle. While I love having a KindleFire, there's nothing like holding a book in your hands.  It's because I was born in the 20th century, 1960.  I'll always prefer holding a book, even while I appreciate new technology that makes it possible to have a bookreader that I can use for internet and playing WordsWithFriends!  Should cut down on the space needed for books, because I don't necessarily want to keep all the books I read.  And when I try to put books-even brand new books- up for giveaway I almost have to BEG people to enter (which I find frustrating - I don't ask for demanding entries or hoop jumping for extra entries and all that)  I should be gettin Chasing Magic within two days (I ordered this a few days ago - so I should get it on Monday, right?) and I also bought something I've been wanting for a very long time.  A DVD of Terry Pratchett's Hogfather.  Over in England they MAKE MOVIES OUT OF HIS DISCWORLD BOOKS!  I want to see them - very much.  Hogfather is one of my favorite of his books, Death takes over the Hogfather role (kind of a rough father christmas) which leaves his job unattended, so his stepgranddaughter, Susan has to take over his duties....fun times are had by all.  Sadly, Tin Swift will have to wait - but that just means I'll have some books to look forward to buying in a few months. I love to make lists of books to buy, something I haven't had to do for a few years.  It'll be fun - a list for my kids to buy for me (Christmas is coming).
Barnes & Noble - if you had kept these books in stock, you would have made a sale of at least two books to me - too bad.  Now I wonder how many other books you'all aren't keeping in stock... (like they care about selling two books, *g*) 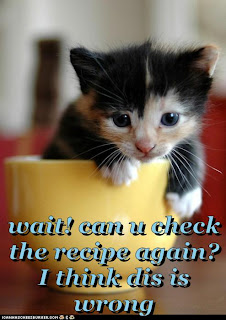 Did you read the whole post?  Wow - pretty cool.  Thanks for reading, have a good reading week, hope all the books you read this week are good - great.  Have a good week, and hug all your loved ones
Posted by Mardel at 4:57 AM