The Cold Kiss of Death Review 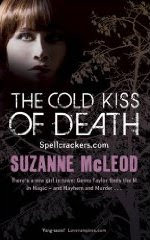 The Cold Kiss of Death

Suzanne McLeod
******
Every once in a while you read a debut novel, get all excited about it, want to read the sequel, but the sequel doesn't compare with the original. I'm happy to say that this sequel to The Sweet Scent of Blood was just as fun to read as the first book in the Spellcrackers.com series. Suzanne McLeod's characters are an interesting mix of good and evil. Not one of her characters are completely good, though a few of her characters are simply evil. It makes for a great read. You are not sticking your finger down your throat thinking, "Ugh!, how corny" { I think when women hit the beginning of menopause, we must lose our patience for reading super-sweet, uber-good heroines, among other things...husbands, people who take way too long to get to the point... } The mix of vampire lore and fae is good one { and a certain writer thinks it can't be done. two separate myths and all that...ha! it's fiction, there are no LAWs saying what mix you can write! the fiction police are not going to write you a ticket! there ARE NO fiction police. }
The main character, Genny (Genevieve Taylor) is suspected of murder, only the murder is not as simple as you would think. No, there are many twists and turns in this book, and once again I was surprised at the actions of a few of the characters. Malik, her vampire ....not yet boyfriend, interest... remains mysterious, though we learn { no, not the royal we, we as in readers } a little bit more about the relationship between Malik and Genny, even something that Genny wasn't aware of herself. I am usually able to read vampire books without feeling all gooey about the vampires { come on...they're dead! and usually cold, and the diet-kind of icky! } but I kind of like Malik, and Darius { the slut }, as well as the fae- Finn, and Tavish....and few others. Besides being in hiding while trying to find out the true killer, Genny has the added complications of the vampires all trying to own her, and the fae of the city deciding that they must all claim her also. Ghosts make appearances, and are interesting minor characters that play an important part in this story.
Wonderfully done. I'm hoping Ms McLeod feels like writing more about Genny and her crew. I'm hoping Ms Mcleod feels like writing anything in the urban fantasy genre. She writes well, and most important of all- THE DIALOGUE IS NEVER LAME, NEVER DUMB. Mini-Rant follows: That's got to be the thing that bugs me the most about some books - the lame dialogue coming out of tough, or intelligent characters. doesn't work for me. That's probably why I never finish some books. I give props for anyone able to come up with plots and all the details that flesh out a book, but the dialogue is almost as important as the plot. If there are going to be intelligent, clever, tough as nails people in the book, their speech should't be lame. or they shouldn't do too much in lecture-mode to give information to the reader- or the main character asks so many questions to herself, you suddenly feel pressured, and you're like "hey you should know this! I can guess what's going to happen without coming up with all the questions, and I'm not even in your book!" enough already with the questions-a few here and there, okay, but not paragraph after paragraph. One book I'm trying to read has two or three paragraphs of questions in almost every chapter so far. I feel like giving the book away. I don't even want to finish it now, and I was looking forward to this one......OKay- Mini Rant is over now. Thank god, Ms McLeod doesn't do things like that. Thank you, Ms McLeod for not doing things like that. There is no stupid dialogue between characters, and the main character only asks herself a few questions. She doesn't go on and on and on with the questions ad nauseum. This book just flows, from beginning to end. I look forward to more books by Suzanne McLeod, who has now joined my mental list of auto-buy writers. By the way, if you go to her website, she has chapters up of BOTH her published books, as well as a contest, which ends July 23, '09. I appreciate when writers put up excerpts. That way you can tell if the book is going to be something that you enjoy, if you'll like the style of writing. I wish more writers would do that. That's why I became interested in this series. Stumbled onto her website, saw the book covers, clicked on the excerpt, and WOW! Instant fan. Good excerpt -first chapter. You can't go by the first page anymore for some books; the first page can be great, but then it might go downhill from then. Ms McLeod's books are interesting from the first page to the last.
Posted by Mardel at 2:44 PM